Many Path for Many People

Why do people fight wars over religion? Isn’t religion supposed to provide peace and self realization?

Yes religion’s original purpose was seeking inner peace, finding a path that moved toward some greater part of ourselves that we could not readily accept without a conduit like religion. This part of us has always existed and some are readily able to find it without much guidance, some access it quite naturally, but most need a little assistance in locating it and that is where religion comes in.

Over the years religion has gotten a bad reputation. Not just one religion but religion in general. It seems to have become dogmatic and aggressive in its tactics. Religion almost seems to seek power for itself. However we must remember that religion is not the problem, it is the people within the religion that can often become so certain of their path being right that they create the dogma, the aggression, and the almost demand that everyone must follow their chosen path.

Of course some people simply require others to believe as they do because they need constant reassurance that they are in fact on the right path. If they are following path A and the neighbor is following path B and both are sure their path is right then how can that be? Somehow we have convinced ourselves that only one path can lead to the correct outcome.

Religion itself is not bad. Religion can be beautiful. Each person has to make the choice of who they are and will be within their religion. And sometimes one must move between groups within the same religion to find a group that fits our values.

Much of the above havoc within religions has led to many people leaving organized religion and calling themselves spiritual only. Following a purely spiritual path to find the inner peace, self realization, and eventual outcome. A spiritual path will often take beliefs from many different religious and spiritual systems to form a uniquely personal belief system that works for each individual.

Most generally this keeps those on a spiritual path much more open of mind because they are interested in learning from every person they meet. They realize anyone might hold another piece of the puzzle they are continuously putting together.

And then of course there are those who feel no need for the belief in a higher power. They may or may not seek inner peace or other typically spiritual pursuits. They are fine with simply believing that this is what there is and there is nothing more at the end of this physical journey. This actually gives them peace within. These folks are generally called Atheists, believing in no higher power. Though there are some who become as dogmatic and demanding as if this were a religious path itself, many are quite happy to allow others whatever beliefs provide some comfort.

Wars get fought over religion and battles (though usually more verbal) are sometimes fought over non-religion because individuals get stuck in the belief of their own rightness. 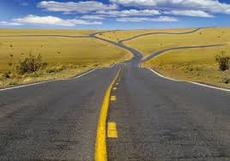 There are hundreds of ways to get from Maryland to California, some are shorter, some are longer, some might take you around in crazy figures, but no path is wrong because what you see, do, and learn along the way is right for you. Your experiences are yours alone along that journey. And just as with normal roads/paths, there are many paths through this life. Along each of these paths one will have certain experiences that are meant just for them. There is no wrong there, only different.

Long time writer/blogger. Has been on a lifelong journey for self enrichment. This is a journey which never ends and I look forward to sharing it with you.
View all posts by Tracy Seekins »
« What Does It Mean When You are Told You Have Fibromyalgia
You Matter »

One thought on “Many Path for Many People”